Despite "taking responsibility" and apologizing for disrespectful social media usage, Councillor Mike Nickel and the same team that caused him to apologize for lapses in judgement in 2016 appear to be doubling-down on the very same tactics that got them in hot water.

In 2016, Councillor Mike Nickel apologized for a rape joke posted to his Facebook page.

His Facebook page showed an image of a drugged snow white with then-convicted-rapist Brock Turner and now-convicted-rapist Bill Cosby lurking over her. It was captioned: "We couldn't resist … We're just going to post this here and see what happens."

But, we learned this weekend, the team of Altheim and Nickel are still very much exercising bad judgement and posting offensive, divisive content on Mike Nickel's Facebook page, without taking any responsibility for the consequences.

In the past month, Mike Nickel has been criticized for politicking during a pandemic. This weekend, he took it one step further and made several posts that many believe to be a soft-launch of his mayoral campaign for 2021. The culmination of these posts was an attack on his council colleague Andrew Knack, that clearly violates the council code of conduct (pdf) sections regarding respectful communication.

Why would Mike Nickel choose to personally attack a council colleague like this, and why would he choose a target like Andrew Knack, who is well known in the Edmonton political scene as being very easy to get along with?

It's because when Mike Nickel published a divisive post strewn with misinformation, Andrew Knack sought to correct the record. 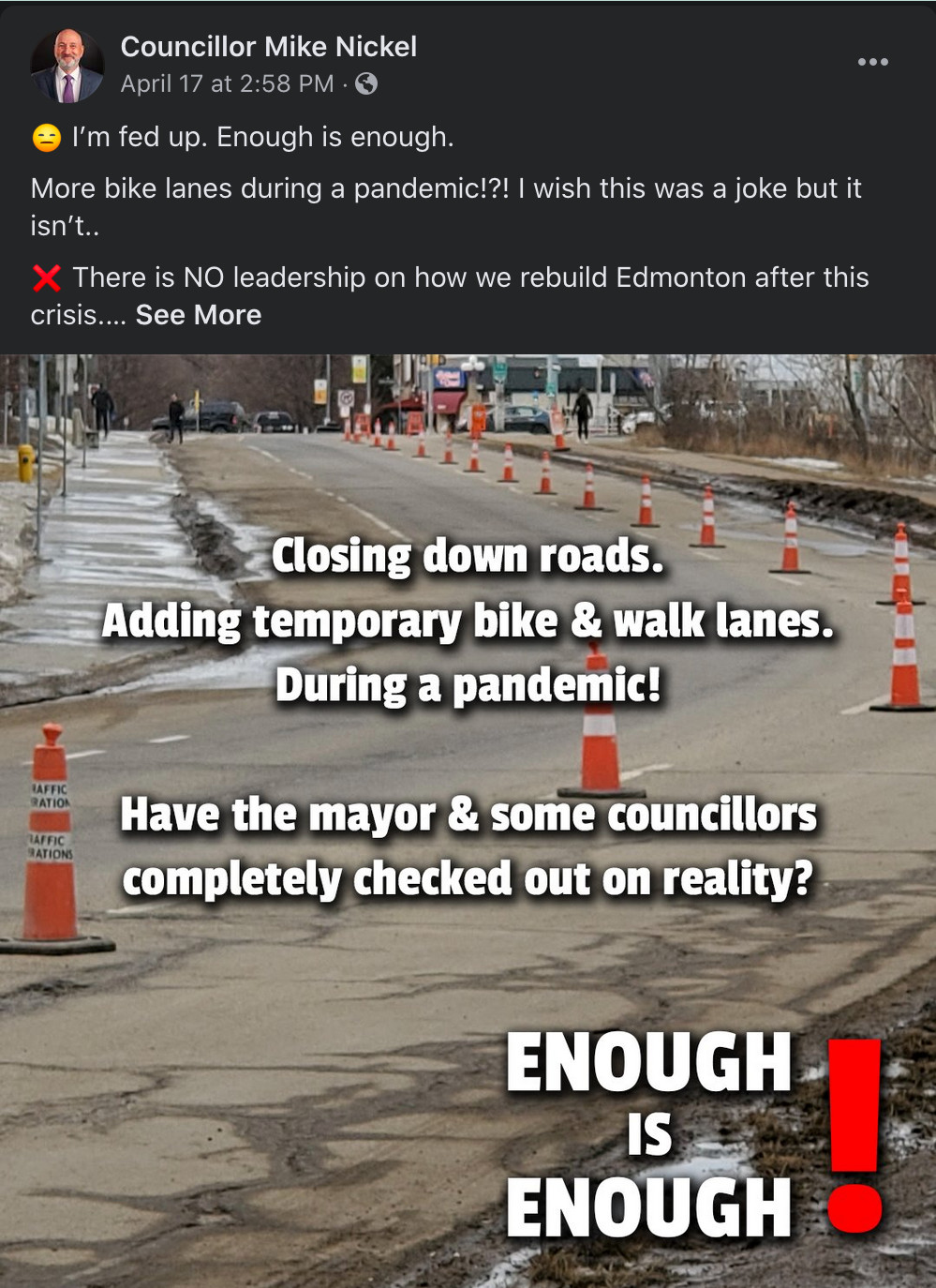 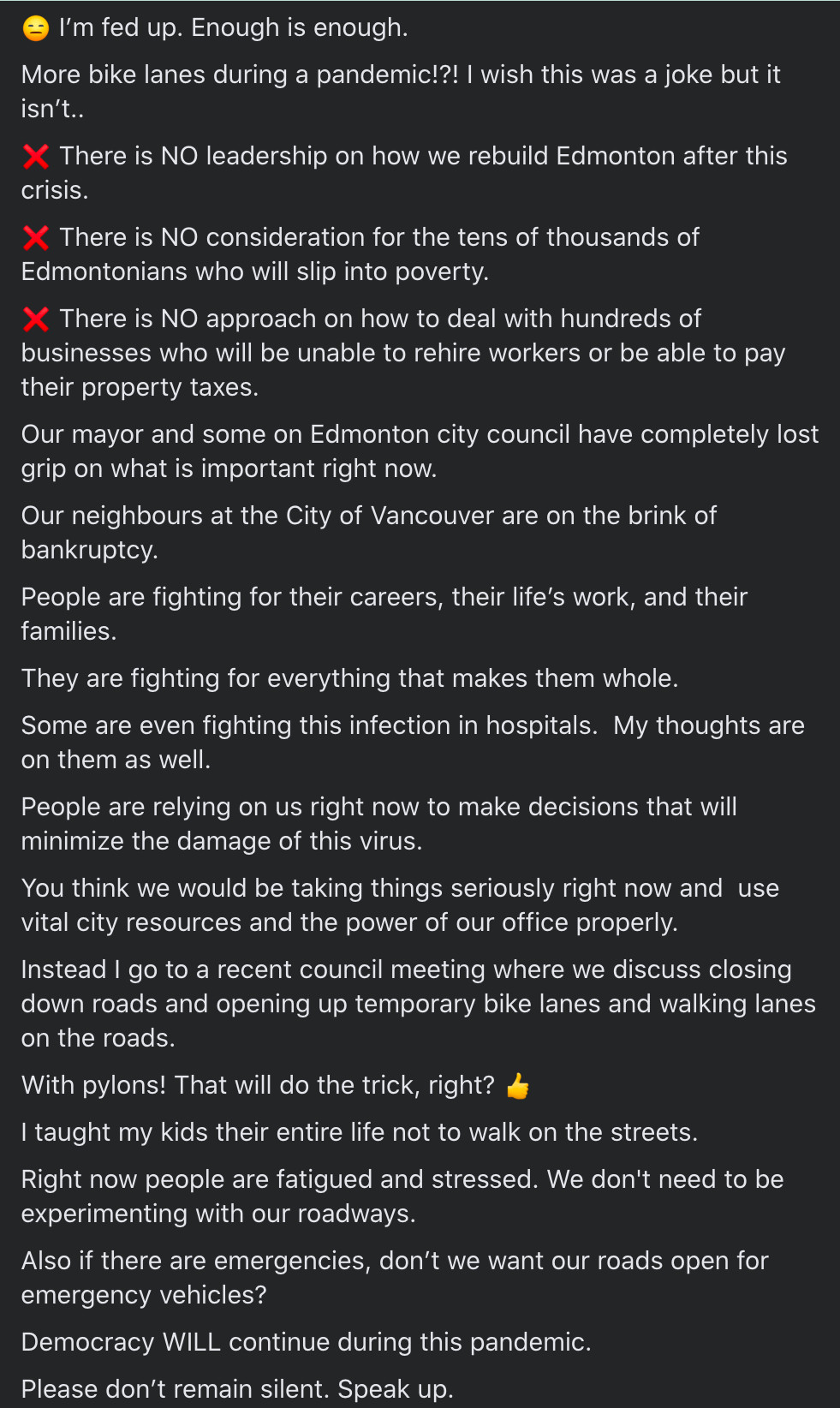 After Mike Nickel's post was widely shared, his colleague Andrew Knack dispelled some of the myths and lies in a post titled "Facts Still Matter".

But disrespectful, code-of-conduct-violating language and communication is not the worst of this affair.

The team of Matthew Altheim and Mike Nickel seem to be back at their earlier tactics of posting divisive, offensive content in order to sow discontent and outrage and boost their engagement and their profile.

Perhaps when Matthew Altheim "took full responsibility" for the rape joke posted to Mike Nickel's Facebook page, no responsibility was taken at all.

Mike Nickel deleted that tweet shown above and reposted it with a new tweet that hides Matthew Altheim's name. This has the appearance of a councillor aware that working with this individual shows an abdication of his responsibility for respectful discourse, but does so anyway for his own benefit.

Mike Nickel is incorrectly lambasting the hardworking City of Edmonton staff and council for lack of leadership and irresponsible spending during a pandemic.

The councillor needs to address if he believes what he's doing now is leadership, and what he thinks responsibility looks like. It seems for Mike Nickel, "taking full responsibility" is avoiding taking any responsibility at all. It's time for the councillor to be held accountable for what he says in public and on social media.

I've reached out to Councillor Nickel with this post for comment. I don't expect to hear back.