There's an interesting question of assigning blame in traffic collisions. If you took the AMA defensive driving course before getting your permit, you'd recall them saying "No one party is 100% responsible for a collision. It could have been avoided through awareness and defensive driving". It's an interesting take on the situation - if everyone recognizes that the system is dangerous and everyone is actively attempting to compensate for both their errors in as well as the errors of others using the system everyone will be safer. It's a nice idea, but it doesn't work. If it did work, we wouldn't have had 25,000 collisions in 2015.

The City of Edmonton has (or at least claims to) adopted a different mindset for preventing these collisions: Vision Zero.

Vision Zero is the Swedish approach to road safety, that comes down to one simple idea:

There is no moral justification for any loss of life in traffic.

So how does Vision Zero prescribe to accomplish that? Simple, Vision Zero accepts that humans will make errors, so the system must account for that. Typical roadway design has focused on maximizing capacity, and then assigning blame to users when incidents occurred. But with Vision Zero design, the entire system is focused on increasing safety at every turn, so the system takes leadership in preventing scenarios where user error could cause injury.

Now, consider the image above from the City's proposed "heads up" campaign. What do you notice about it, and do you think the advertising aligns with what I've just described as the globally recognized definition of Vision Zero? Certainly not.

In fact, I would argue this ad does significant harm to the Vision Zero iniative by educating drivers that pedestrians are at fault for collisions.

If the pedestrian didn't want to get hit, they shouldn't have been wearing those clothes.

Let's look at the City's justification for this ad campaign, and what they're hoping to accomplish:

If you are wearing dark clothing, or even yellow or orange clothing in the dark, you are not visible to drivers until you are 36 metres from them. If a vehicle is travelling at 60 km/h on dry pavement, and presuming that the driver sees you and reacts immediately, the minimum stopping distance is 36 metres. If you are lucky, it will only bump you.

Reading that paragraph, it's decidedly not a Vision Zero approach, despite the big red bar they put at the bottom of their advertising. It says that if you are walking in the dark, drivers simply cannot stop in time at 60km/h to avoid hitting you.

Think about that for a moment. The city is stating, with our current system, if you cross a 60km/h road at night you will be hit by a multiple ton piece of metal, even without driver error. Does that sound to anyone else like an acknowledgement that the system is designed to fail? Surely, starting a campaign with such a line proposes that the system needs considerable reform, correct? Well, no. Again, from the City of Edmonton (emphasis mine):

No matter who is at fault, a human body is no match for a vehicle. Pedestrians have only a 10% chance of surviving if the vehicle that strikes them is traveling over 50 km/h. Pedestrians and drivers share responsibility for preventing collisions. Do your part. Keep your heads up and look out for each other.

You'll notice one thing not mentioned there by the City - the crux of Vision Zero - the responsibility of the system to prevent these collisions. What changes are being made to reduce this? There's a very clearly outlined problem here: drivers cannot see pedestrians in time to stop, so what changes are being made to fix it. Well, apparently, none. Other than trying to get everyone walking around in the evening to wear reflective pinnies.

So, what should Vision Zero look like to address this problem. Well there's a couple things, the most obvious of which: if in the system you can't see pedestrians when it's dark, light the areas where pedestrians are likely to be! 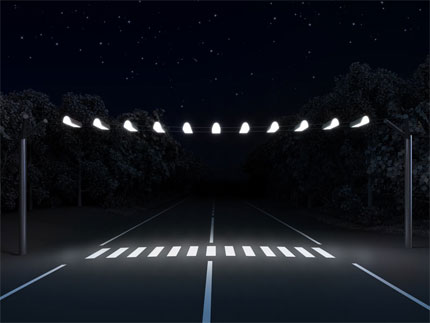 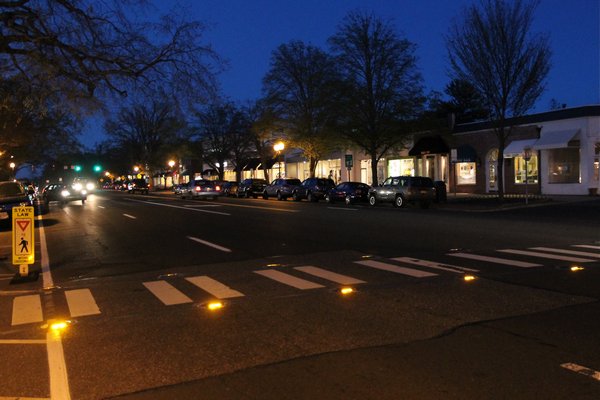 Of course wherever pedestrians are crossing and parking exists, extending the curbs is almost always a great idea:

As well, there's another very obvious option which is if the stopping distance at 60 km/h is too high, then perhaps it's time to consider reducing the speed limit. This option, however, is probably not the best case solution for Edmonton. I've talked a lot about reducing pedestrian deaths because that's the target of this campaign - but Vision Zero isn't about pedestrians, it's about drivers as well! Many of the roads in Edmonton that are 60km/h are not pedestrian hotspots - the areas simply are not incredibly walkable. It doesn't make sense to significantly hamper all the drivers using a road to protect pedestrians if pedestrians aren't even there. The above design enhancements can be considered for the pedestrian crossings of these larger roads, and it should not be cost-prohibitive because if there are enough common pedestrian crossings to make it cost-prohibitive, than the speed limit should be reduced on that section of roadway anyway!

Yes, we have drivers that are texting, and they should be punished. Yes, we have some pedestrians with their heads in their phones, and we should encourage them to look up before crossing the street, but it's time for the City to start taking responsibility for the massive role system design plays in this equation, or stop pretending to be implementing Vision Zero. Let's take a look at what a "Vision Zero" version of the City's "Blame Game" text could look like:

No matter who is at fault, a human body is no match for a vehicle. Pedestrians have only a 10% chance of surviving if the vehicle that strikes them is traveling over 50 km/h. The City of Edmonton is working hard to make crossings safe for all users. Pedestrians are encouraged to cross where the roadway design has been updated to make sure it works safely for all users, but roadway design is an evolutionary process. If you find a location that is not safe yet, please call 311 and let us know.

Until then, I will continue to play The Blame Game, but I'll be assigning blame to the party that - according to their own chosen policy of Vision Zero - deserves it: the designers of the unsafe roadway system.

A Quick Stop in Idaho: Should Edmonton cyclists be able to yield through stop signs?